Wow 2 already! I can bearly believe it and I have to admit it's very emotional for me. Much more then the 1st birthday. The last 2 years were such a blessing to watch A grow and develop. Words cannot describe how much I love him and how he teaches and inspires m to be a better person.

But the last two years were also challenging and a big adjustment for me. I also have to admit that I wasn't sure that I wanted more children. I could bearly understand how people had 2 kids, 3 were just wow. Now I want more, many many more. lol. But Id efinately want another one. And if it wasn't for DH's PhD I think we'd start sooner. I just have to be patient and try to get healthy.

The last two years have been amazing, can't wait to see what the next one will bring.

Anyway here is a list of things A can do now:

Looking back at my last post that mentioned what A is able to do, he is growing and developing so quickly!

I am a total cliche when it comes to chocolate. "Hi, my name is Natalie and I'm a chocoholic".  My go to chocolate has been Lindt, love almost all of their ranges, especially their dark chocolate (the salt, orange and coconut are my favourite). However, maybe you've noticed I'm trying to be more concious of the food I'm eating. I also want to go past the mass produced food and give the little/local guy a chance. And if I have to be honest Lindt is a bit over mass produced for my liking. 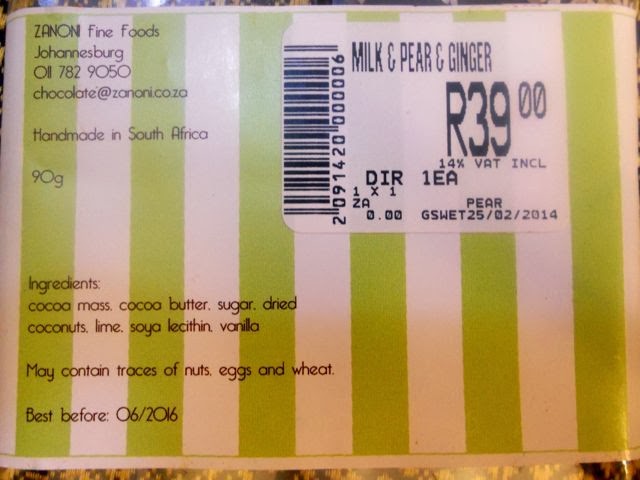 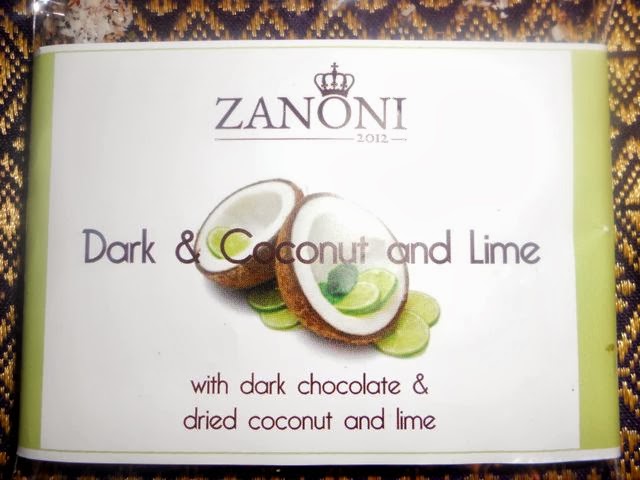 So I was at my local Spar looking for my next chocolate fix. And this new chocolate range caught my eye. The brand is called Zanoni from Chocola j and they had a range of dark chocolates: Coconut and Lime, Chilli, and Pear and Ginger. What was also cool that the packaging was clear so you could see the chocolate. It's produced locally and the list of ingredients was short, simple and sweet. So I thought I'd try it. 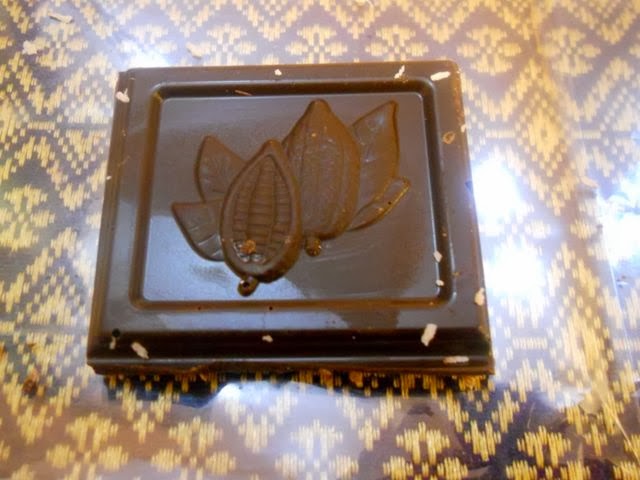 Now the taste, was really yummy, very smooth, chocolaty with a bit of texture and sweetness coming from the coconut. I could compare it to Lindt coconut dark chocolate, but the Zanoni chocolate flavour was more delicate and the coconut not as over powering as the Lindt. The added lime was working in the backround to compliment the flavours. I will definitely be buying the chocolate again and I highly recommend it to any chocoholic. I might even be adventurous and get the ginger and pear next!
Posted by Natalie M. at 1:07 PM No comments:

The quest for an ethical cupcake

As I'm trying to eat better and make better food for my family I have come to realise that there are many facets to "good" food.  An apple can be a good food, an organic apple would be even better, and an organic apple from your own back yard would be best. Also with so many "revolutionary" diets on the market one does not even know what good it anymore, at least health wise. So what is healthy for you is one aspect of good, another is the environment and where the food comes from and this ties into the ethics part of my post. Food that grows closer to you obviously contributed less carbon emissions getting to your kitchen. I have also been thinking about dairy a lot, especially since becoming a mother. I have grown up with milk and eggs, have been told that cows like to be milked but there more I find out about factory farming and the more I think about what cows have to go through, it feels wrong to me. Some once pointed out to me that it is the sexual exploitation of (female!) animals.

This is where I come into conflict with traditional baking. You need butter, you need eggs and you need milk. Up until not too long ago sugar was part of the slave drive. Suddenly the traditional art of baking does not seem so appealing. When I bake it's almost always a dessert for a special occasion, a celebration, something I make to be enjoyed with people close to me. One should not get joy at other's expense just for a cupcake or a piece of cake.

So I decided to try my hand at vegan baking. So at least my baking will be ethically and hopefully taste wise "good". There will still be fat, sugar and for now gluten involved, but like I said it's meant for special occasions.

I found some really easy cupcake recipes on Chef Chloe's site and decided to do a hybrid coconut and chocolate cupcakes. I think this cupcake turned out great and no one could tell there were no animal products in it. The coconut flavour did not comeout tht much but I do think it added a nice richness. It also kept well for a couple of days. I made the cupcakes on Friday, the buttercream on Saturday and everything still tasted fresh Sunday, when the last cupcakes were polished of.

One evening I finished getting A ready for bed a little before his bed time so I asked my then 17 month old if he would like "milkies" or to play. He looked at me pensively and replied "Old King Cole". What he calls his nursery rhymes book. He wanted to be read to before bed!
Posted by Natalie M. at 12:02 PM No comments:

As a new year resolution DH and I would like to greatly reduce meat and dairy from our diet. Now we have gone virtually vegetarian before but with the business of a new baby we fell of the wagon and with a new year and a new house with a new kitchen we want to get back at it again. I also wanted a new cook book to be inspired again. Browsing the books of Nigella, Jamie and Gordon I felt disappointed I would not be able to cook from much. The title of Vegan cooking for carnivores grabbed me because we sometimes miss the meat and it can sometimes be daunting to completely change your diet and eliminate it when you've been eating it almost everyday. So when I saw this book in the book shop it looked great so we bought it.

"Vegan Cooking for Carnivores" is written by Roberto Martin, the personal chef of Portia de Rossi and Ellen DeGeneres it's published in 2012. The photographs were done by Quentin Bacon. The book came out in September 2013. It is published by Grand Central Life and Style. It is also available as an ebook. The book has over 125 recipes and they include: breakfast, lunch, appetizers and snacks, soups, salads, pizza and pasta, entrees, sides, beverages, desserts and condiments.

Now I have made quiet a few recipes from the book already, including red beans and rice, shepherd's pie, mushroom pasta, rueben sandwich, arrabiata sauce, lentil soup, tofu egg sandwich and garlicky mash potatoes. And overall I am quiet happy I, DH and A have enjoyed everything we have made. (Well except for some reason I have not enjoyed the mushroom sauce pasta, I felt the mushrooms were a bit too strong but I used mushrooms and not shiitake like the recipe stated.)

I would say most recipes are simple to medium difficulty to prepare. He also has a lot of basics like sandwiches, tomato pasta sauce, tomato soup. I think a novice cook or a an everyday cook would easly master them. Martin is South American so a lot of his recipes are spicy and are Latin. I enjoyed cooking the food from that region. I think if someone is starting out as a vegan or a vegan starting to cook or a vegan living with a carnivore this book is great. If you are an experienced creative vegan cook you might find this book a bit boring. Not every recipe has a picture but there are a number of good photographs.

The one problem I have with this book is some of the ingredients it asks for. As I said some recipes are pretty basic and simple but being in South Africa the ingredients aren't so easy to find. For example there is a recipe for a grilled cheese sandwich. You need vegan cheddar cheese, I've seen vegan cheese once, it wasn't cheddar but it was expensive. A lot of recipes, especially desserts asked for vegan butter, I haven't seen vegan butter and I don't want to use margarine. Same problem exists with vegan mayonnaise. So that would require making your own substitutions and hope it works in the recipe. The Americans are lucky to have som many vegan alternatives.

So If you're in the US and the book looks enticing, get it the recipes are tasty. Anywhere else be warned that you might have trouble finding some of the ingredients!

When it comes to comfort food there's not much better than a warm hearty shepherd's pie. Traditionally it is made with lamb mince but since we want to cut down on meat I've been looking for a good simple lentil shepherd's pie for ages. I love eating it out of a bowl, it makes it even more cosy and tasty. I adapted this recipe from Vegan Cooking for Carnivores by Roberto Martin.